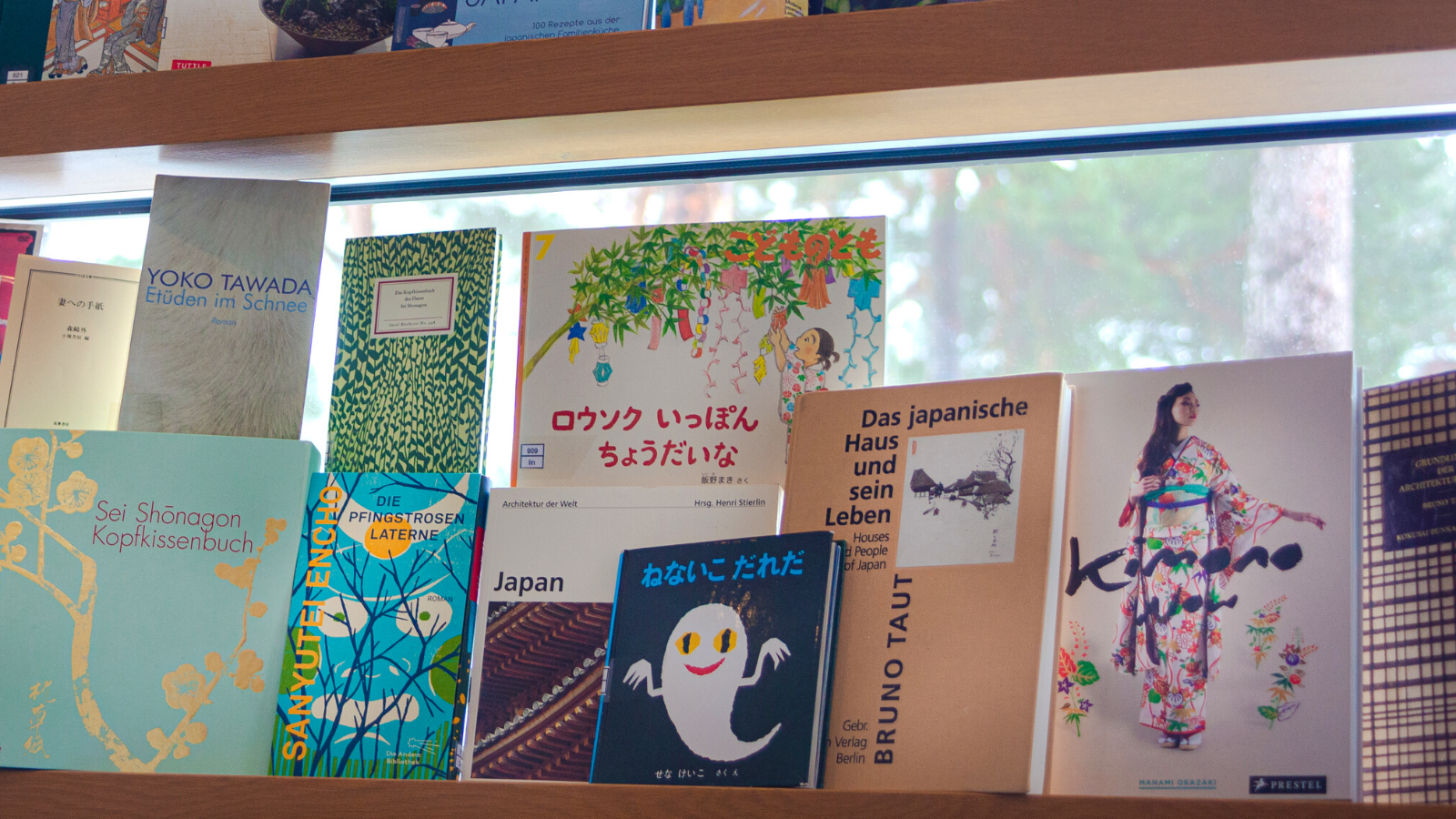 The JDZB library houses a wide collection of Japan-related media and resources. The library is easily accessible with quiet, sunny spaces for studying and reading. You can even borrow books to take home and read. Please bring along a photo ID and your residence registration to become a library member. The usage of our library and the lending is free of costs.

The library is open for book and DVD rental, the 2G rule is applied (access only for vaccinated or recovered persons). A workplace inside the library is not available because of ongoing construction work.

You can search for japanese books and media using the CiNii Books Search.

CiNii Books offers you the possibility to search in the inventory of japanese universities and some japan-related libraries abroad for bibliographic infos about magazines and books as well as where to find them. Notes on CiNii search can be found HERE.

To the CiNii Books Search

The library of the Japanese-German Center Berlin owns about 13.000 media in Japanese, German and English (books, periodicals, newspapers, DVDs). There is a wide range of Japanese literature (in Japanese and in translation), children’s books , books on various themes of Japanese culture and on the relations between Japan and Germany/Europe. There are books on sciences, history, economics, politics, and society. Those who learn Japanese will find grammar-books, textbooks, or easy-to-read Japanese literature. And there is a wide range of reference books, like dictionaries, encyclopedia, and statistics.

The library system is based on the “Nippon Decimal Classification” (NDC), which is used by most academic and public libraries in Japan. Bibliographical data of the entire book collection is available electronically in both Japanese and western languages and can be researched in the library. You can also view our library catalog online. In addition to the bibliographical database of the library’s own collection, the JDZB’s library also has access to a database that is based on the seven (to date) published volumes of “Japan-Bibliografie” (by W. Hadamitzky and M. Rudat–Kocks, published by K.G. Saur Verlag). These volumes contain more than 11,500 titles of German language Japan-related publications that were published between the years 1477 and 1985. In addition, you may also electronically search the bibliographical data of monographs translated from Japanese into German from the period 1945 to 1998.

Exchange of Publications
The publications of the JDZB are available through cooperating libraries as exchange of literature. If you would like further information, please contact the library.

If you like to contact our library, please feel free to write us an email or give us a call.

Here you can find lists of our stock sorted by topics for browsing.

The JDZB’s library works together with the following organizations in the area of library services or Japan information:

The JDZB cooperates with the EAJRS, the European Association of Japanese Resource Specialists.

If you like to find out more about this cooperation, please visit http://eajrs.net/

StaBiKat: Online catalog of the National Library in Berlin
http://stabikat.staatsbibliothek-berlin.de/

The Historiographical Institute, The University of Tokyo
http://www.hi.u-tokyo.ac.jp/index-j.html